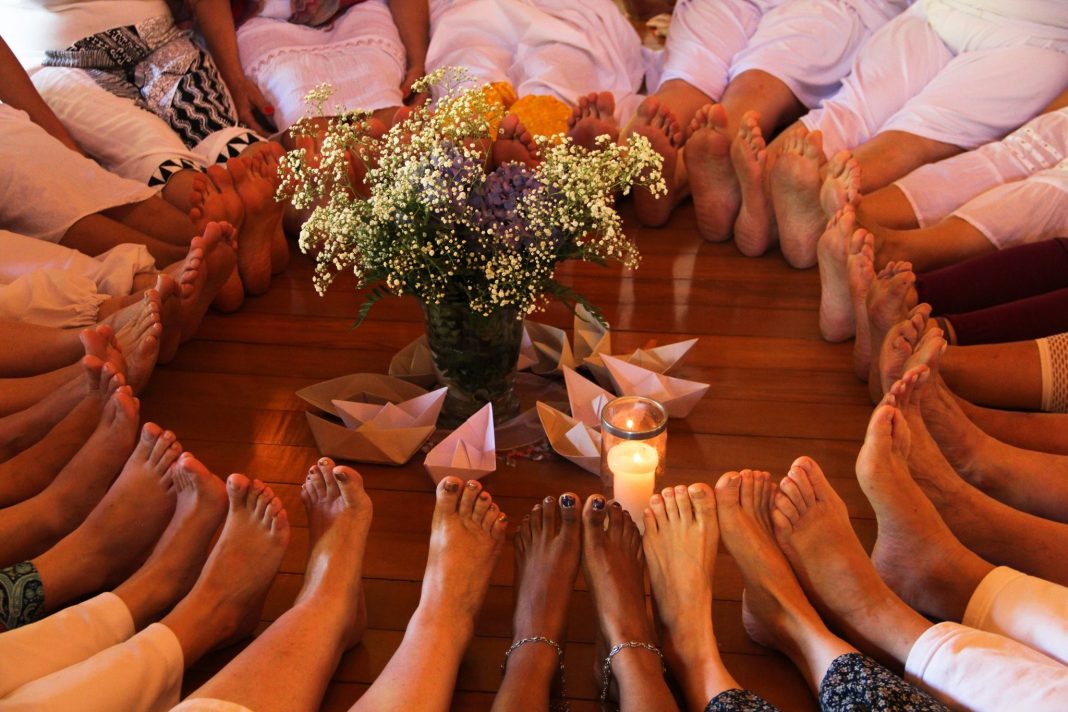 “My experience as a woman within Ananda Marga is horrible. If you start to stand out a little more, you are boycotted. I’m telling you from 30 years of experience. If you do something, if you call attention, they would dampen your flame. ” The testimony of Kalyanii Souza, from Curitiba, PR (Brazil), impacts those who know the philosophy of Ananda Marga. Anandamurti fought vehemently for the rights and recognition of the value of women – not only in Ananda Marga, but in society as a whole. In one of his several speeches on the subject, he states:

“We are about for creating a powerful, dynamic and emerging social consciousness, especially among women, so that they are inspired to rise, abolish dogmas, annihilate all symbols of slavery and usher in a new era of coordinated and glorious cooperation achievements. Let women be the vanguard of a new revolution that humanity needs to come to a glorious tomorrow “(Few Problems Solved, part 9 in Thoughts by P. R. Sarkar, p.250)

Therefore, while there are women who have had a positive story with Ananda Marga, experiences like that of Kalyanii and other women reveal the need to revise the contradictions between the philosophy proposed by Ananda Marga and her daily practice. A contradiction that happens, in fact, in society as a whole. As a way of listening to the voices of these women and investigating these contradictions, the second chapter of the series “universalism” addresses the role of women within Ananda Marga, focusing on the experience of some Brazilian margiis, who have reflected and acted on the theme of female protagonism.

In principle, Ananda Marga proposes a universalist ideology that supposes the inclusion of everyone, not to reproduce inferiority and superiority complexes and to defend the right of men and women to have the same conditions for physical, psychic and spiritual evolution. However, within a society with entrenched values ​​that go in the opposite direction of all this, the practice of the relations between margiis and acaryas, as well as the power structure within the institutions of Ananda Marga, reveal the difficulties in following these ideas.

For the Acarya Maheshvarananda Avadhuta, the teachings of Anandamurti are universalist, even though not all margiis and wholetimers (WTs, acaryas renunciantes) are. “Personally, I feel that Baba’s teachings are universalist. I would not belong to an organization in which sisters and nuns are not viewed as spiritual equals to brothers and monks and deserving of equal opportunity. However, obviously, not all the members of Ananda Marga or all the wholetimers are universalist. It is up to all of us to push for women to have equal positions of power.”, he explains.

Renu (Renata Camargo), who lives in Botucatu, SP, Brazil, believes that, because it is an ideology coming from India, a country that has a history of deep subjugation of women to men, the “archetype of the Indian religion” cultural trait in Ananda Marga, despite the universalistic proposal. “I am part of women’s movements in civil society and I think it is much easier to speak of women in the civil society than in Ananda Marga,” she says. According to Dharma Mitra (Patrícia Reis), a resident of Porto Alegre, RS (Brazil), “we have a long way to go. We need to put on the agenda the ‘non – place’ that women, in my point of view, still is in Ananda Marga. And this has to be discussed with men as well, in the retreats, in the groups. We have several examples of strong women, who do incredible jobs, didis and margiis, but still our main leaders are men. “

This inequality does not exist only in the places of power, but it also affects spiritual practices. Because, if women get most of the household chores and still work outside, they have fewer opportunities to engage in their spiritual practice. “There is no social thought: although in our name ceremony is clear that everyone is responsible for that child who joins the community, then, in practice, this does not happen. We do not worry collectively, except for very rare exceptions,” says Renu.

In addition to the work overload, there are other serious issues, such as domestic violence. According to Renu, the institution’s position is often to blame the woman. “And what I see within  Ananda Marga and other religions is that there is an incentive for women to keep quiet, to forgive the violence suffered. There is no organizational culture that encourages women to denounce, to not accept this, which is a very serious issue, because when it comes to physical violence, usually, previous to this  there were already other types of violence. This culture goes against P.R. Sarkar’s own ideology, which says that forgiveness is something subjective, that you should not want the evil of the other person, but at the objective level forgiveness is a sin, because injustice must be repaired. Then, as tantric spiritualists we don’t want to cooperate with violence, on this pretext of forgiveness” she explains.

In order for these and other issues to have their proper place of respect and understanding, a group of women started organizing a coordinated co-operative. There is a facebook page https://www.facebook.com/mulherescooperacaocoordenada/ and there will be a retreat in Botucatu from the 10th to the 14th of October. Renu, who is at the forefront of this movement, believes that feminine values ​​must be placed in the system, and that women and men can access those values. The idea that the feminine only belongs to the woman and the masculine only to the man “is a construction of the patriarchy: there is the feminine and masculine in both and for cultural and historical reasons women have developed certain attributes by the function of gestation, and nurture”, she says.

Gaotami (Carla Arantes de Souza) brings another insight into this union of women in groups. According to her, this movement is beneficial because women have much to contribute: “the problems that we live will not be solved with force, they will be solved with a lot of sensitivity and intuition, and I think we have a lot of that potential. We have the possibility of building something new. For women this possibility is a little bit bigger, in that we are not in these spaces of power and we do not even like to dispute those spaces. We are interested in making a more subversive change.” She says she does not believe in the oppressed and oppressor, victim and tormentor and therefore thinks that this group of women should be careful not to exclude men. “You do not heal yourself if you feed off anger, healing does not happen like that,” she says. On the other hand, Renu believes that women can and should be in the places of power. “I believe that a revolution has to happen in the peripheries of the system, yes, but to say that women do not want to compete for power and be in the spaces of power, I do not agree,” says Renu.

So, how do you feel about this? Give us your opinion, suggestion of books, websites and videos, to enrich our discussions!

For those who want to delve into the topic, here are some suggestions for pages:

. Group of women in coordinated cooperation

About the number of hours spent on household chores

By the Editorial Staff

Special Series: Universalism – Part 1. Are we universalists in practice?