Home Sections #editorial Do you know who is behind the journal?

Dharma for All was born in 2014, based on the initiative of four ananda margiis, with the purpose of supporting pracar activities in Brazil and in other countries. Whether it is encouraging existing work or supporting new proposals, the goal is to strengthen those who are truly committed to bringing the practices and philosophy of Ananda Marga to a wider audience.

Our work is directed along two axes: fomenting projects and training people.

In the project development side, we have already emitted two requests for proposals:

(i) The first was exclusively for acaryas who were presenting projects that would take place in Brazil. This resulted in five projects, among them the Ananda Marga website in Brazil (www.anandamarga.org.br).

(ii) The second was an Ideas Contest, aimed at margiis and acaryas. Of the fifteen project proposals we received, two were selected and are already underway. You can see more about the approved projects atd4all.org/projetos/.

In the training axis, we aim to contribute to the ideological formation of margiis through initiatives such as:

(i) Vistara Dharma Camp, a seminar program with the intention of creating a cooperative network of people and their projects.

(ii) Pracaraka Samgha, a study group born of a need identified at the second Vistara Dharma Camp meeting. Here, the main books that delineate the philosophical basis of Ananda Marga are being studied once a week through an online platform, as well through face-to-face programs several times a year. https://d4all.org/2018/04/25/pracaraka-samgha/

All these activities have given us daily inspiration. We know the importance of each one’s efforts so that in unison we may guide other beings along the path of bliss. Accordingly it is important that this and other information can be circulated more effectively and comprehensively.

Toward this end, our most recent project, the Dharma for all Journal, was born in April 2018. This is an open channel and instrument of information exchange, so that we can all move together toward Consciousness.

*Dharma for all editorials are a vehicle to freely express the opinion of the Dharma for all managing board, and they do not constitute journalistic content.

Celebrate, be grateful and feel your connection with the divine!

9th edition of the Journal, with more changes toward our common, unchanging goal, Parama Purusa 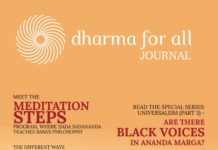 The inspiration of the service devoted by the wholetimers, in the...